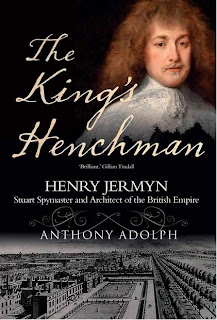 I don't pretend to know much about history -certainly not Stuart history. I'm vaguely aware that James I (or VI of Scotland) succeeded Elizabeth I. I'm also aware that Charles I was before the 'Commonwealth', and Charles II was after. I sort of know that the 'Restoration' was Charles II, but that is the limit of my knowledge - or it was, anyway.

Henry Jermyn served both Charles I, and Charles II. But, far more importantly, he served Henrietta Maria, the wife of Charles I, and the mother of Charles II. He seemed to be her real soul-mate, from the beginning when he was dispatched to Paris to negotiate her marriage to Charles, to the very end. He survived her by several years, but his life seemed defined by service to her.

It was rumoured then that they were lovers - who knows? Charles II was considerably taller than both his parents, far more like the imposing height of Henry Jermyn.

I've learned a lot from this book. A lot about the politics of the time, and how the kings of the time were supported and influenced by a limited number of powerful noblemen.

Jermyn had many spheres of influence: not just the queen and the kings, he was possibly an important freemason, and also built 'St James' in London - St James Square, Jermyn Street, etc, following the influence of European classical architecture.

An interesting book giving me a much deeper understanding of 17th C history.